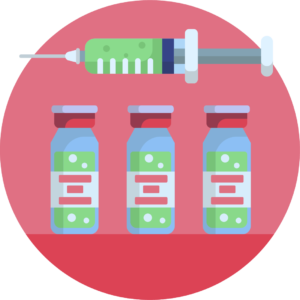 The efficacy of the flu vaccine has long been an area of interest for researchers.  Because of the high rate of mutations between influenza strains, the vaccines developed annually may not always match the prevailing strain that is circulating in the population.  This is problematic from a public health perspective and may lead to a higher incidence of influenza in years with poor match.  Efficacy is also a common concern cited by individuals who choose not to receive the vaccine.  Several mitigating strategies are in play, including monitoring the strains present in the opposite hemisphere when developing vaccines, but CEIRS scientists are also working from a different angle.  Recently published in Nature, Nachbagauer et al. reports promising results from the development of a universal flu vaccine and its performance in early trials.

While the head of the hemagglutinin protein of the influenza virus is often the target of vaccines, it is also the domain that changes most rapidly.  Drs. Daniel Stadlbauer, Adolfo García-Sastre, Peter Palese, and Florian Krammer of the CRIP CEIRS Center along with Dr. Patrick Wilson of the NYICE Center are working with other collaborators to target the stalk of the protein in an effort to confer broad, stable protection to influenza infection.  This revolutionary work requires a thorough understanding of the structure of influenza proteins and the subsequent human immune response, as well as significant trial and error to assess safety and efficacy in comparison to the annual flu vaccine.  Because of these protracted requirements, scientists have dealt with development challenges, but current public enthusiasm over vaccines and concerns for compounded disease outbreaks may provide necessary support for these influenza trials.