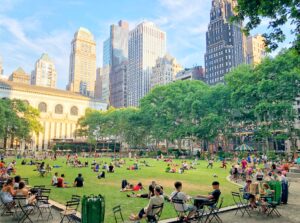 Bryant Park in New York City before the COVID-19 pandemic

Several investigators from the Center for Research on Influenza Pathogenesis (CRIP), including Drs. Daniel Stadlbauer, Harm van Bakel, and Florian Krammer, completed a retrospective analysis of SARS-CoV-2 seroprevalence in New York City that has been accepted for publication by Nature. The study is based on a large and demographically diverse dataset that was assessed over several months during the first wave of COVID-19 infections. Surveillance data reveal that SARS-CoV-2 was circulating in the city as early as mid-February and an estimated 20% of its population have already been infected. Despite optimism surrounding vaccine development, the COVID-19 pandemic is still a major concern worldwide. Analyses like this will continue to shape scientific understanding of disease dynamics, which is especially valuable as cases spike secondary to holiday gatherings and colder weather.

Earlier this year, Dr. Krammer discussed this seroprevalence work with The New York Times, which was also featured on the CEIRS News page.