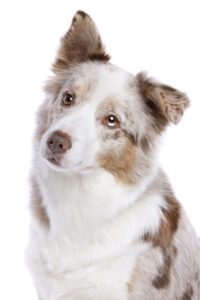 A border collie dog, a possible carrier of canine influenza.

The NIAID Centers of Excellence for Influenza Research and Surveillance (CEIRS) Network was established in 2007 in response to the 2005 HHS Pandemic Influenza Response & Preparedness Plan. The aim of the CEIRS Network, in addition to the ongoing influenza surveillance and research activities carried out by the Centers, is to collaboratively contribute to the knowledge and infrastructure required for influenza pandemic preparedness, including virus risk assessments, pandemic public health research response plans, and other collaborative research projects. Since 2007, the CEIRS Network has participated in multiple pandemic responses, including the 2009 H1N1 influenza A epidemic, 2013 H7N9 zoonotic influenza outbreak, and the ongoing COVID-19 response.

While the CEIRS Network has aided in the response to real-world pandemics, it was determined that a pandemic response exercise would help the Network strengthen its cross-Center relationships and identify the strengths and weaknesses of the Network’s response to a pandemic. To this end, the CEIRS Network set out to collaboratively investigate the potential risk of emerging canine H3 influenza viruses. This investigation served as both a pandemic response exercise to determine how effectively the CEIRS Network could work together to provide important basic research, and a virus risk assessment, filling important data gaps on canine H3 influenza viruses for the scientific community at-large. Much is unknown about these emerging influenza viruses, and while no human cases of canine influenza virus infection have been reported, these viruses could still pose a zoonotic risk to humans. Each of the five CEIRS Centers contributed to the response exercise and risk assessment by performing basic research to characterize these viruses.

The five Centers that make up the CEIRS Network each have a unique focus and mission. The diversity of the Centers’ work enables the CEIRS Network to efficiently perform research, while sharing data and findings in a collaborative environment. The work from the Centers can contribute to better influenza vaccines, faster identification of strains during flu season, and potential new treatments. Each Center has strengths that the Network can leverage during a pandemic response. The Center for Research on Influenza Pathogenesis (CRIP) performs domestic and international animal influenza surveillance, and research on pathogenesis and host response. The Emory-University of Georgia (UGA) CEIRS focuses on swine influenza virus and immune response, and human immune response to vaccination. The Johns Hopkins CEIRS is developing improved methods to identify circulating influenza strains quickly during flu season and investigating how infection affects human respiratory epithelial cells. The New York Influenza Center of Excellence (NYICE) studies how the human immune system response to flu vaccines and viral infections. The St. Jude CEIRS performs domestic international influenza surveillance in wild birds and domestic animals, and studies human immune response and risk factors associated with flu complications. During the H3 canine influenza risk assessment, each Center contributed to the exercise in a different way, highlighting the collaborative nature of the CEIRS Network. 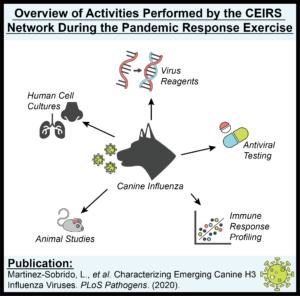 A schematic of the different types of tests performed by the CEIRS Network during the exercise.

Prior to this collaborative exercise, the risk canine H3 influenza viruses pose to humans was not known. The CEIRS Network studied these viruses to provide information to support criteria included in the CDC Influenza Risk Assessment Tool and the WHO Tool for Influenza Pandemic Risk Assessment. The CEIRS Centers performed basic research to determine characteristics of the virus such as receptor binding properties, transmission and infection in animals, and susceptibility to antivirals. Seven canine influenza strains were investigated in this study, as well as seven genetically related human influenza strains.

The exercise began with the Centers developingviral stocks and synthetic viruses using reverse genetics to provide to all the different institutions participating in the exercise. Synthetic viruses were included in the exercise, since it is likely in an actual pandemic, the genomic sequence of the etiologic virus will be available before virus isolates can be distributed to research institutions. Once all the groups had viral stocks in hand, they were able to begin performing the basic research required to complete the risk assessment.

Through this exercise, the CEIRS Network demonstrated the canine H3 influenza viruses can replicate in human primary nasal epithelial cells, but not in bronchial epithelial cells. It was also found that canine H3 influenza viruses preferentially bind to avian receptors and has a HA acid stability similar to other mammalian viruses, which can contribute to virus adaptation to a different species host. Animal models were used to determine pathogenicity and transmission in animal models. CEIRS researchers found that the canine H3 influenza viruses can replicate in mice, but only cause morbidity in certain lines of mice. Transmission experiments performed by the Network showed that ferrets and guinea pigs can both transmit the viruses effectively though direct contact. Another group determined that the viruses were sensitive to the M2 inhibitor Amantadine and neuraminidase inhibitors Oseltamivir, Zanamir, and Peramivir. CEIRS researchers used multiple methods to characterize the human immune response to the canine H3 influenza viruses. The viruses’ genomic sequences to calculate antigenic relatedness to vaccine strains, which found that the canine viruses were more closely related to older human strains, rather than more recent strains. Serum samples were tested to determine pre-existing immunity and were used to determine if seasonal vaccination changes the antibody response to the canine viruses. Another group identified cross-reactive human monoclonal antibodies that reacted to the canine viruses. Based on the collective work of the CEIRS Network, it was ultimately determined that canine H3 influenza viruses pose a low risk to humans.

The CEIRS Network identified several lessons that can help improve the response of the Network in the future. The Network found that even with a sequence, it is not always guaranteed that a virus can be generated. Specifically, the lack of UTR sequence information in public databases prevented investigators from recreating certain viruses during the exercise. The Network also identified limitations to its collaborative nature. Many groups participating in the exercise could not receive the viruses or other reagents due to institutional technology transfer problems. To resolve this, the CEIRS Network established universal material transfer agreements between all institutions in CEIRS and created agreements that allow for technology transfer during public health emergencies. Going forward, the CEIRS Network will be able to more easily share reagents between institutions during a pandemic to facilitate effective and timely research.

The lessons learned by the CEIRS Network through the canine H3 influenza virus risk assessment exercise have prepared the Network for responding to the current COVID-19 pandemic. CEIRS Centers have been able to share reagents generated by the Network, which has facilitated the work performed by the CEIRS Centers to, among other activities, develop diagnostic tests, perform transmission experiments, and study the immune response to COVID-19. The CEIRS Network will continue to apply the lessons learned during the canine H3 influenza virus risk assessment exercise to the current pandemic, and any future pandemics that may occur.